Scores have always been very important for games. Sure, there are many people that look for nuanced reviews from their favorite critics, but alas, you have to admit that there’s a pretty big share of people who read diagonally (if at all) and then jump to the conclusions and check the score – and then, of course, go to Twitter to bitch about it a little bit. But that’s not exactly new: we did the same thing in the school yards when we were kids and argued endlessly about why a game received a higher score in this magazine or another. People just love to argue. Thing is, even though this score-mania is not new, it has become a bit omnipresent. There are review scores, Steam scores, user scores – and of course, the mother of all scores: the Metascore.

Of course, you know what it is: the Metascore is an average score (sort of. We will talk about that later) calculated by review aggregator Metacritic from the scores of a selected assortment of media from all over the world. Thanks to the extra patina of legitimacy that comes from offering a summary of many different opinions, Metacritic soon became the first-choice review aggregator for gamers and the industry alike – and therefore it is now a measure of success by itself. In triple-A development, bonus are paid or not depending if a certain Metascore is reached, for instance. Some people argue that Metacritic has grown too important, for it gives arbitrary power to a hand-picked bunch of reviewers who may have their own biases and occasional tantrums. On the other hand, many people find that its usefulness outweighs its problems. 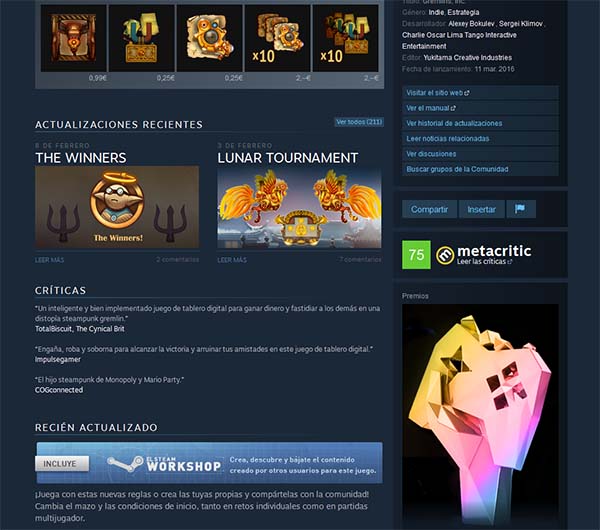 A green Metascore badge in Steam can drive your sales

Mouth to ear is very important for indie games, and a good Metascore can be very important for that. If your game is on PC, its Metascore will be shown in its Steam Store page. At the end of the day you can’t (nor should) control what critics say about your game, but at least you can develop a strategy to use your strengths and minimize your weak points. You’re looking for a 75 score or more: that’s the sweet point where it shows up in a green badge, marking it as a game with “generally favorable reviews” instead of “mixed or average reviews”. It might seem trivial, but it is really important. For someone skimming your Steam or Metacritic page, that green badge can be the difference between an impulse purchase or not, between a game worth checking and a mediocre one.

There are a few things you should know about these scores. First: for your game to have a page in Metacritic, you need to submit its info in GameFAQ, since Metacritic feed on their database. It’s not difficult: just sign up, go here and submit all the relevant info, with special attention to platforms, name of the game and the studio (most important part for SEO) and release dates. Second: they never change a score. Never. Jamais.  Никогда. Mai. Nunca. In order to maintain the independence of their aggregated publications and avoid outside influences, they won’t accept any petition to remove or change a score, even if it comes from the original publication. Once we could prove that a particular review said lies about one of our games (i.e. saying that it didn’t have single player mode even if it has one, or something like that) and had only played the game for 10 minutes. We contacted Metacritic just to let them know and they said, OK, you are right, we might consider removing this publication in the future – but that bad score stays. I guess they would (eventually) if you can prove real malice and intention to cause your company some harm… but good luck with that.

Moral of the story: sometimes running into a jerk is inevitable, and in the fullness of time you will receive your own share of unfair reviews – but try at least not to make their life easier by sending them a key for your game! There’s only one exception: reviews of games in beta or Early Access don’t count for Metacritic. If your game is in Early Access and a review shows up, they will remove it as soon as they notice (or, more often, as soon as you ask). Oh, and second bottom line (we could call this one a footnote): if there’s any wrong detail in your Metacritic page, contact them and they will gladly fix it. They’re actually a very nice people!

There’s another important thing that you should know about your Metascore: it can change after release if you receive more Metacritic-listed reviews. Metacritic doesn’t accept scores for games released more than one year ago, though (that’s why I said that correctly submitting the official release date is very important!) – for better or worse, if your game is older than that your Metascore is final. Therefore, if you didn’t get your own score in your first week, don’t despair – you still have plenty of time to work on it… but don’t stop checking your Metacritic page once in a while either!

And how can a media outlet be inducted in Metacritic? Well, it’s a complicated process. You can apply, you can be invited by them, and I’ve been told that every year they collect suggestions from all their source publications. That means basically that there aren’t an objective criteria: they check a site, and if they like it they aggregate it. They look for audience, but also for quality: I’ve seen small blogs in Metacritic and pretty big sites that never got into it. And that’s exactly why the Metascore is not calculated as an arithmetic average, but as a weighted one: big publications have more impact in the final Metascore; a review from a big American website is more important than one from the tenth biggest Lietchesteiner site. This weighted average is calculated with a secret algorithm created by Metacritic with the goal of correcting and balancing the different social impacts of every media – although it can give a lot of leverage to publications that, how to put it politely, shouldn’t be in Metacritic or in any planet inhabited by human beings. 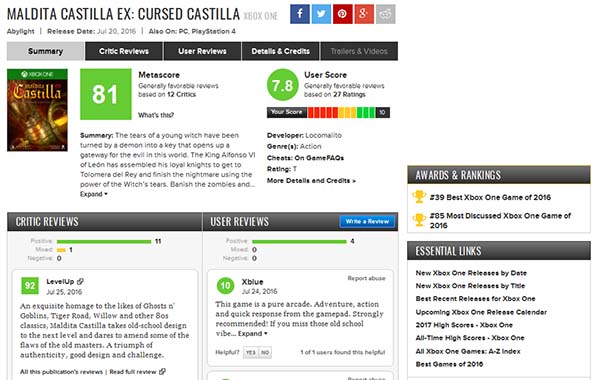 This is how a good Metacritic page looks like!

Interestingly enough, publications whose scores are included in Metascore calculations aren’t listed here: that’s a complete list of all the media outlets that have been listed at some point. You can find the current list of relevant publications in Metacritic’s FAQ; look for “Which critics and publications are included in your calculations?”. There are all kinds of publications in Metacritic, some biggers and more mainstream than others, and some of them might suit your game better than others. But as you can see, they aren’t actually that many, so when you plan your media strategy, research thoroughly that list to find those media who might understand better your game. It will totally worth the effort. There might be a reviewer in a relatively small blog who enjoyed the previous installment of your IP or a guy in Freedonia who is specialized in your niche genre: go for them! Sure, their review will count less for your Metascore because of the weighted average, but they will pay you more attention and treat your game better than a big triple-A site. If you check a publication’s profile in Metacritic you will find if it reviews higher or lower than the average critic (which is also a useful indicator, but not necessarily definitive) and looks for reviews of games similar to yours. That’s not to say you should ignore big outlets, of course, but regarding your Metacritic strategy, focus your efforts where they will be more effective!

With all that said, let’s summarize in a few bullet points:

Well, that’s more or less our Metacritic 101, the most basic knowledge that can be useful for every indie developer out there. Getting a good Metascore can be difficult for a small indie studio, but it can be easier if you understand how the aggregator works, so we hope that this helps you sometime! Do you have any further doubts or want to share your experience or opinion? Go to our comment section or ping us on Twitter or Facebook, we will be happy to hear back from you!